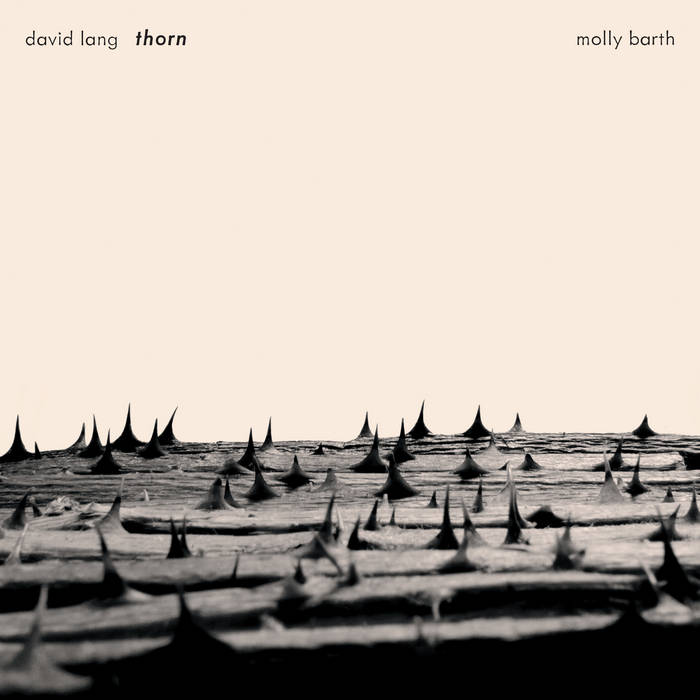 thorn is flutist and eighth blackbird founding member Molly Barth's collection of short works by David Lang, and has been described as "...a varied yet consistent overview of Lang’s chamber music activities, a vital part of his output that deserves continued attention even as he moves into larger forms and more expansive concepts. The performances, by Barth and a small host of excellent associates (including fellow former blackbird Matt Albert on violin), strike just the right balance between nervous tension and technical security." (Steve Smith, The Log Journal)

About the title piece, David Lang writes: "My first idea for thorn was to embed a single spike somewhere in the middle of a long, slow, quiet melody. I thought that the listener would then spend the first part of the piece in fear and the second part in shock, and this would change the ways that the tune would be perceived. The problem was that the spike turned out to be the most interesting part of the piece, and, ultimately, I couldn’t resist the temptation to add many, many more of them."

All works on this disc were recorded in Beall Hall, on the campus of the University of Oregon.

Grammy-Award winning flutist Molly Alicia Barth is the Associate Professor of Flute at the University of Oregon.

A contemporary music specialist, Molly was a founding member of the new music sextet eighth blackbird, and is a co-founder of Duo Damiana and the Beta Collide New Music Project. Molly plays a Burkart flute and piccolo. For more information, visit mollybarth.com.

Molly Barth would like to acknowledge the support of her collaborators, David Lang, the Oregon Arts Commission, and the University of Oregon School of Music and Dance in the production of this CD. David Lang would like to thank Molly Barth for her musicality and commitment. Plus all the presenters and commissioners and funders and musicians and tech people involved with this recording. And Kenny Savelson, Philippa Thompson, Tim Thomas, Mike McCurdy, Sruly Lazaros, Brian Petuch, Bill Murphy, Adam Cuthbert, Denise Burt, Michael Gordon, Julia Wolfe and Suzanne Bocanegra.

Featuring Gary Bartz, 5 years of Rhythm Section Intl and an LP of the week by Nicolas Jaar